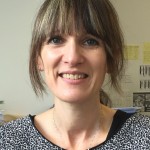 Integrons ensure a rapid and “on demand” response to environmental stresses driving bacterial adaptation. They are able to capture, store, and reorder functional gene cassettes due to site-specific recombination catalyzed by their integrase. Integrons can be either sedentary and chromosomally located or mobile when they are associated with transposons and plasmids. They are respectively called sedentary chromosomal integrons (SCIs) and mobile integrons (MIs). MIs are key players in the dissemination of antibiotic resistance genes. Here, we used in silico and in vivo approaches to study cassette excision dynamics in MIs and SCIs. We show that the orientation of cassette arrays relative to replication influences attC site folding and cassette excision by placing the recombinogenic strands of attC sites on either the leading or lagging strand template. We also demonstrate that stability of attC sites and their propensity to form recombinogenic structures also regulate cassette excision. We observe that cassette excision dynamics driven by these factors differ between MIs and SCIs. Cassettes with high excision rates are more commonly found on MIs, which favors their dissemination relative to SCIs. This is especially true for SCIs carried in the Vibrio genus, where maintenance of large cassette arrays and vertical transmission are crucial to serve as a reservoir of adaptive functions. These results expand the repertoire of known processes regulating integron recombination that were previously established and demonstrate that, in terms of cassette dynamics, a subtle trade-off between evolvability and genetic capacitance has been established in bacteria.IMPORTANCE The integron system confers upon bacteria a rapid adaptation capability in changing environments. Specifically, integrons are involved in the continuous emergence of bacteria resistant to almost all antibiotic treatments. The international situation is critical, and in 2050, the annual number of deaths caused by multiresistant bacteria could reach 10 million, exceeding the incidence of deaths related to cancer. It is crucial to increase our understanding of antibiotic resistance dissemination and therefore integron recombination dynamics to find new approaches to cope with the worldwide problem of multiresistance. Here, we studied the dynamics of recombination and dissemination of gene encoding cassettes carried on integrons. By combining in silico and in vivo analyses, we show that cassette excision is highly regulated by replication and by the intrinsic properties of cassette recombination sites. We also demonstrated differences in the dynamics of cassette recombination between mobile and sedentary chromosomal integrons (MIs and SCIs). For MIs, a high cassette recombination rate is favored and timed to conditions when generating diversity (upon which selection can act) allows for a rapid response to environmental conditions and stresses. In contrast, for SCIs, cassette excisions are less frequent, limiting cassette loss and ensuring a large pool of cassettes. We therefore confirm a role of SCIs as reservoirs of adaptive functions and demonstrate that the remarkable adaptive success of integron recombination system is due to its intricate regulation.