e.g. searching for members in projects tagged cancer
Search for
Count
IN
OUT
Content 1
Content 2
Search
Go back
Scroll to top
Share
The perivascular origin of pathological fibroblasts
The putative flippase Apt1 is required for intracellular membrane architecture and biosynthesis of polysaccharide and lipids in Cryptococcus neoformans
© Research
Publication : Journal of immunology (Baltimore, Md. : 1950) 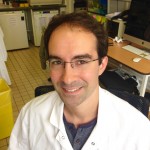 The preimmune repertoire consists of mature T lymphocytes that have not yet been stimulated in the periphery. Memory phenotype (MP) cells have been reported as part of the preimmune repertoire (i.e., T cells bearing memory markers despite lack of engagement with cognate Ag); however, little is known about their trafficking and function. In this study, we hypothesized that MP cells, naive to TCR stimulation, constitute a transient population that traffics to tissues during development. Using mutant and transgenic animals with a monospecific TCR, we discovered increased numbers of MP CD8+ T cells circulating in nonimmunized Cxcr3-/- and Cxcl10-/- mice compared with wild-type animals. Phenotypic differences included decreased numbers of preimmune MP Ag-specific T cells in the skin and thymus and a distinct pattern of activation upon TCR engagement. Our results show for the first time, to our knowledge, an important role for CXCR3 and CXCL10 in the tissue distribution of preimmune MP cells.