Egypt has the highest prevalence of hepatitis C virus infection worldwide. CXCL10 is a potent chemoattractant that directs effector lymphocytes to sites of inflammation. It has been reported that plasma CXCL10 is processed by dipeptidylpeptidase IV (DPPIV) thus leading to the generation of an antagonist form. Using Luminex-based immunoassays we determined the concentration of different forms of CXCL10 (total, agonist, and antagonist). We also evaluated plasma soluble DPPIV (sDPPIV) concentration and plasma dipeptidylpeptidase (DPP) activity. Using flow cytometry and immunohistochemistry, we analyzed the distribution of lymphocyte subsets. Plasma CXCL10 was elevated in chronic HCV patients, however the agonist form was undetectable. Increased sDPPIV concentration and DPP activity supported the NH2-truncation of CXCL10. Finally, we demonstrated an increased frequency of CXCR3(+) cells in the peripheral blood, and low numbers of CXCR3(+) cells within the lobular regions of the liver. These findings generalize the observation of chemokine antagonism as a mechanism of immune modulation in chronic HCV patients and may help guide the use of new therapeutic immune modulators. 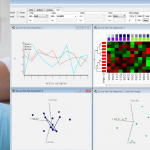