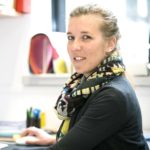 UNLABELLED: Understanding the modalities of interaction of neurotropic viruses with their target cells represents a major challenge that may improve our knowledge of many human neurological disorders for which viral origin is suspected. Borna disease virus (BDV) represents an ideal model to analyze the molecular mechanisms of viral persistence in neurons and its consequences for neuronal homeostasis. It is now established that BDV ensures its long-term maintenance in infected cells through a stable interaction of viral components with the host cell chromatin, in particular, with core histones. This has led to our hypothesis that such an interaction may trigger epigenetic changes in the host cell. Here, we focused on histone acetylation, which plays key roles in epigenetic regulation of gene expression, notably for neurons. We performed a comparative analysis of histone acetylation patterns of neurons infected or not infected by BDV, which revealed that infection decreases histone acetylation on selected lysine residues. We showed that the BDV phosphoprotein (P) is responsible for these perturbations, even when it is expressed alone independently of the viral context, and that this action depends on its phosphorylation by protein kinase C. We also demonstrated that BDV P inhibits cellular histone acetyltransferase activities. Finally, by pharmacologically manipulating cellular acetylation levels, we observed that inhibiting cellular acetyl transferases reduces viral replication in cell culture. Our findings reveal that manipulation of cellular epigenetics by BDV could be a means to modulate viral replication and thus illustrate a fascinating example of virus-host cell interaction.

IMPORTANCE: Persistent DNA viruses often subvert the mechanisms that regulate cellular chromatin dynamics, thereby benefitting from the resulting epigenetic changes to create a favorable milieu for their latent and persistent states. Here, we reasoned that Borna disease virus (BDV), the only RNA virus known to durably persist in the nucleus of infected cells, notably neurons, might employ a similar mechanism. In this study, we uncovered a novel modality of virus-cell interaction in which BDV phosphoprotein inhibits cellular histone acetylation by interfering with histone acetyltransferase activities. Manipulation of cellular histone acetylation is accompanied by a modulation of viral replication, revealing a perfect adaptation of this “ancient” virus to its host that may favor neuronal persistence and limit cellular damage.