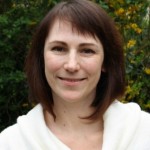 Protein complexes directing messenger RNA (mRNA) degradation are present in all kingdoms of life. In Escherichia coli, mRNA degradation is performed by an RNA degradosome organized by the major ribonuclease RNase E. In bacteria lacking RNase E, the existence of a functional RNA degradosome is still an open question. Here, we report that in the bacterial pathogen Helicobacter pylori, RNA degradation is directed by a minimal RNA degradosome consisting of Hp-RNase J and the only DExD-box RNA helicase of H. pylori, RhpA. We show that the protein complex promotes faster degradation of double-stranded RNA in vitro in comparison with Hp-RNase J alone. The ATPase activity of RhpA is stimulated in the presence of Hp-RNase J, demonstrating that the catalytic capacity of both partners is enhanced upon interaction. Remarkably, both proteins are associated with translating ribosomes and not with individual 30S and 50S subunits. Moreover, Hp-RNase J is not recruited to ribosomes to perform rRNA maturation. Together, our findings imply that in H. pylori, the mRNA-degrading machinery is associated with the translation apparatus, a situation till now thought to be restricted to eukaryotes and archaea.