We found that Argonaute 1 and 2 proteins (AGO1 and AGO2) participate in the recruitment to intragenic chromatin of both chromatin-structuring factors (HP1γ and histone Lysine-methylases – KMTs: EHMT2 and SUV39H1) and components of the spliceosome, in particular U2 and U5 snRNPs. Our data suggests that this machinery facilitates inclusion of alternative exons by locally assisting the rapid assembly of a functional spliceosome and by generating chromatin structures interfering with the elongation rate of the RNA polymerase II (Ameyar-Zazoua et al., 2012).

Argonaute proteins are known to belong to the RNA interference machinery which is, in nuclei, essential to silence heterochromatin repeated sequences through increase of the H3K9me3 epigenetic mark (Castel & Martienssen 2013, in Nat. Rev. Genet.). We have shown that AGO1 and AGO2 bound to the chromatin can serve to direct the H3K9me3 silencing mark in a particular region in the body of genes, leading to the accumulation of elongative RNAPII and the inclusion of variant exons in the CD44 gene. Independent studies confirmed the involvement of AGO in alternative splicing modulation (Allo et al. 2009, Taliaferro et al. 2013, for review : Batsché & Ameyar-Zazoua, 2014)

AGO recruitment to the chromatin was dependent on DICER, suggesting that small RNAs are required for AGO targeting. Deep sequencing revealed that small RNAs bound to nuclear AGO2 were essentially in the sense orientation by reference to coding-genes. This led us to hypothesize that an antisense transcript might serve as a complementary template for AGO recruitment. This hypothesis was supported by the existence in databases of an annotated antisense lncRNA (aslncRNA) exactly positioned at the 3’end of the CD44 variant region that coincides with the peaks of AGO recruitment and H3K9 methylation (Ameyar-Zazoua et al., 2012). We also found equivalent situations, i.e. coincidence between perturbation of splicing in AGO2 deficient cells, presence of antisense transcripts and enrichment in H3K9me3 mark in several additional genes. 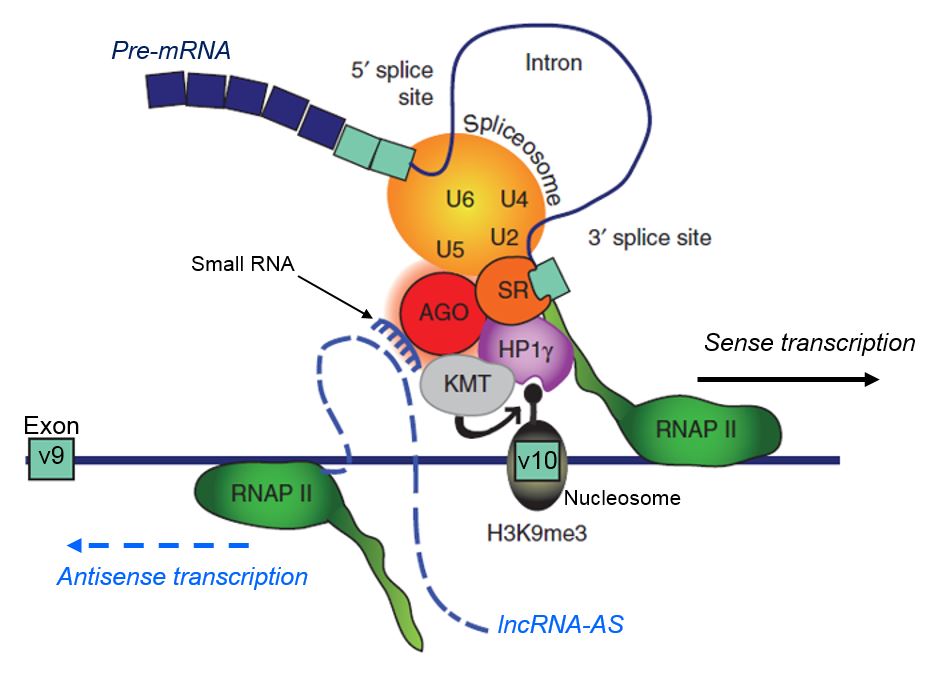