Immunity and vaccine science in neonates

Irrespective of host genetic factors, extremes of age are characterized by a higher susceptibility to particular infections. This remains ill understood due to gaps in the knowledge of the immune system of the newborn and the elderly. Thus, these populations constitute privileged targets and reservoirs for diseases. 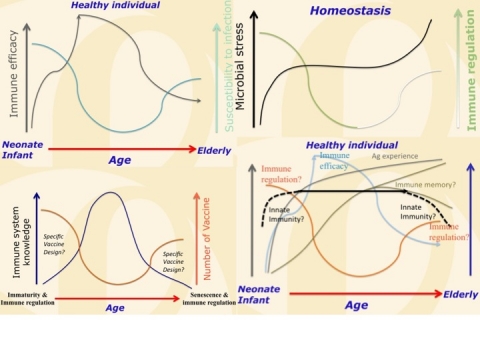 Early life is a period of high susceptibility to infectious diseases and a stage of immune maturation. Poor CTL or Th2-skewing responses are rendering the individual particularly susceptible to intracellular pathogens. Pediatric vaccination is poorly efficient, particularly before six months of age, requiring many boosts. For decades, newborns have been considered as immunologically immature, this period being considered as prone for tolerance induction. We challenged the hypothesis of neonatal immunological immaturity by showing that mouse DCs are fully functional and can efficiently induce Th1 and CTL responses in newborn mice. Our main work is to decipher regulatory mechanisms at work in early life. Our objective is to provide an integrated picture at the level of both effector and regulatory cells of how the neonatal immune system accommodates pediatric vaccines and pathogens. 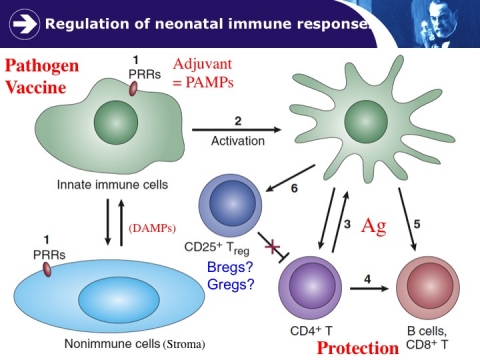 We evidenced a neonatal mouse regulatory B cell (Bregs) compartment producing IL-10 in the context of Toll like receptor (TLR) activation in vivo influencing CD4 Th cell differentiation through dendritic cell control (Zhang et al, Immunity, 2005). This process is sustained by type I IFN provided by dendritic cells (pDCs and cDCs). This mechanism also provides protection against TLR dependent inflammation and viral infection in neonatal mice (Zhang et al., JEM 2007). We also found that IL-10-producing regulatory neutrophils are able to temper lung inflammation upon mycobacterial infection in vivo and may play a similar role in other bacterial infections (Zhang et al., Immunity, 2009). The human counterparts of these regulatory mechanisms are under investigation in various pediatric diseases. 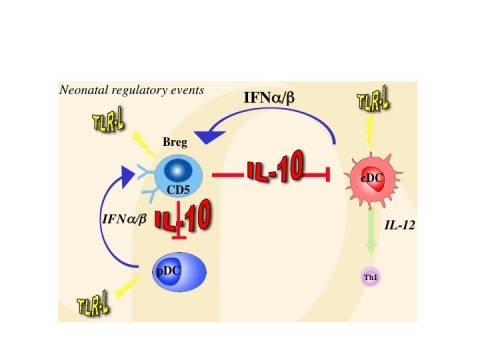 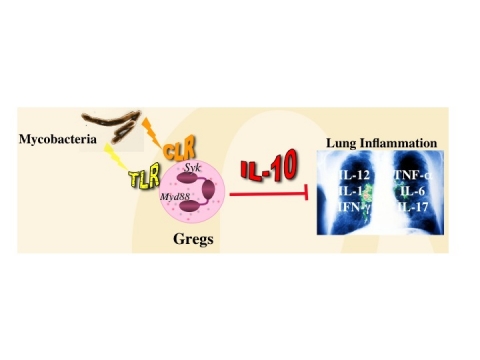 The TLR pathways are strongly impaired in neonates leading to a deficit of innate response. The consequences are a reduced capacity to control pathogens at the level of both innate and adaptive immune responses. Translation of the knowledge of the innate TLR activation pathways to vaccine and adjuvant design has also emerged over the last ten years as a promising strategy to improve prophylactic and therapeutic vaccination. In these conditions, this strategy may fail if applied to neonatal vaccination, and new strategies to improve infant vaccination need to be explored to offer alternatives. The aim of this program is to evaluate the potential of other innate activation pathways including Nod-like receptors (NLR) as well as targeting C-type lectin receptors (CLR) as an alternative for neonatal adjuvant settings. 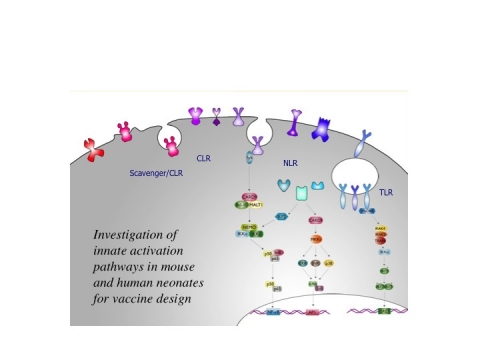 Memory generation is a critical parameter for vaccine-induced protection in infants. We identified and characterized a population of fetally developed effector memory CD4 T cells (Zhang et al, Sci Trans. Med. 2014). Therefore, in the absence of any major infectious history, memory T cells develop in a sterile environment during fetal development and display a large variety of inflammatory effector functions associated with CD4 helper T cells at birth. Mechanisms responsible for memory generation during fetal life are under investigation.