Tuberculosis was initially considered as a clonal population with no known acquisition of genetic material by horizontal genetic transfer, although it carries IS elements with similarity to IS elements from other species. Thanks to a screening of M. tuberculosis transposon mutants impaired in the in vivo growth in macrophages we have identified a genetic region likely acquired by horizontal transfer from another bacterial species.

One of the major virulence traits of M. tuberculosis is its ability to parasitize host macrophages. Pools of mutants generated by STM have also been used in vitro, in THP-1 macrophage-like cells, to search for genes involved in macrophage parasitism. We have identified 23 mutants corresponding to 21 genes or genetic regions that were attenuated in their ability to survive and multiply inside human macrophages. Mutants disrupted in the ABC transporter-encoding genes Rv0986 and Rv0987 were further characterized as being impaired in their ability to bind to host cells. The genetic region has a G+C content inferior to 55% and is in contrast to the G+C content of the M. tuberculosis (superior to 65%).

The Rv0986-Rv0987-Rv0988 operon is highly homologous to ate-H in Agrobacterium tumefaciens, an a-proteobacteria infecting plant roots. This led us to suggest that the operon might have been acquired by the bacilli through horizontal gene transfer (HGT). Using a combination of molecular biology and in silico approaches we have shown that this operon is indeed specific to the M. tuberculosis complex and has been acquired by the ancestor of the complex through HGT from a γ-proteobacterium species. Further analysis of the M. tuberculosis genome using four nucleotides genomic signature revealed 48 M. tuberculosis-specific chromosomal regions with atypical characteristics, potentially due to HGT from environmental bacteria. Many display features typical of the genomic islands found in other bacteria, including residual material from mobile genetic elements, flanking direct repeats, insertion in the vicinity of tRNA sequences, and genes with putative or documented virulence functions.

Using other approaches based on phylogenetic and linkage disequilibrium analysis we analyzed 24 genomes of M. tuberculosis complex isolates and found an excess of genetic diversity in regions encoding key adaptive functions including the type VII secretion system and the ancient horizontally transferred virulence-related regions carrying Rv0986 and Rv0987 genes above described. This analysis showed evident signs of recombination in M. tuberculosis. Recombination tracts add a high density of polymorphisms, and many are thus predicted to arise from outside the clade. Recombination introduced an excess of non-synonymous diversity in general and even more in genes expected to be under positive or diversifying selection, e.g., cell wall component genes. Hence, contrary to some other pathogens and previous proposals concerning M. tuberculosis, this strain family may have come out of its ancestral bottleneck as a very successful pathogen that is rapidly diversifying by the action of mutation, recombination, and natural selection.

Figure 1 : Graphical representation of the distribution of SNPs in two regions of SNPs clustering. Virulence operon horizontally transferred to the ancestor of M. tuberculosis. 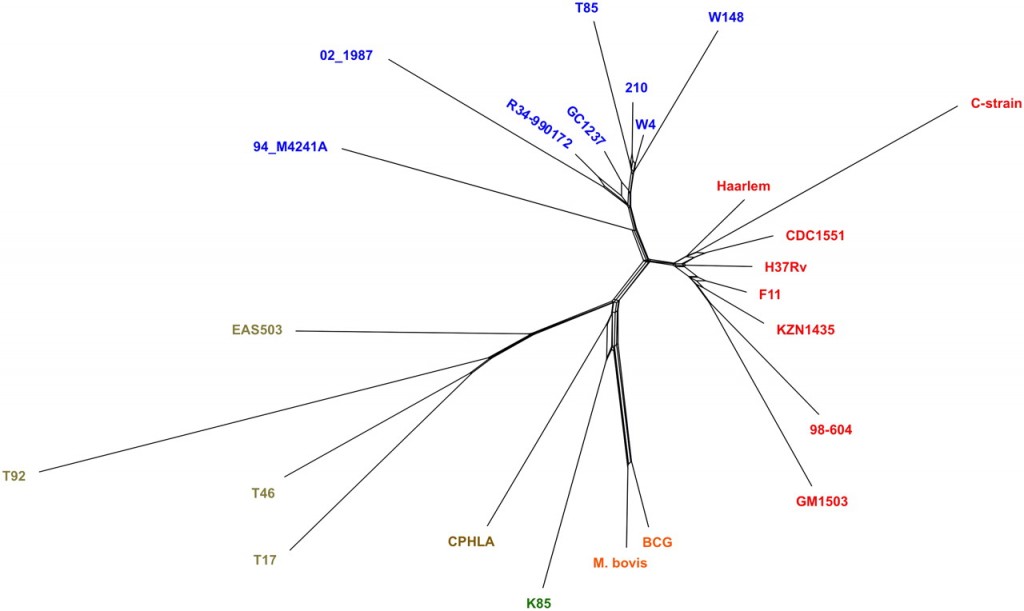