This project started from the modest but rather selective antimycobacterial effect of “dibenzofuran” derivatives such as compounds 1 and 2. Their minimum inhibitory concentration necessary to prevent 99 % (MIC 99) of various mycobacteria growth was found to vary between 1 and 10 µg/mL. Moreover, little effect was observed on the growth of other types of bacteria (1).

It is this unexplained selectivity which provided the impetus to try to design, synthesize and evaluate analogues of these compounds. The goal being to obtain stronger (but still selective) antimycobacterial which would permit the selection of resistant mycobacterial strains which would be genetically characterized to find out their mode of resistance and the eventual mutations of the targeted enzyme(s) providing this resistance. The necessity to work with a strongly active compound is one of the key to such deorphaning endeavors. Otherwise the risk of drowning into useless data is great as compounds endowed with low micromolar effect may owe their activity to all kind of non-selective mechanisms (even in cellulo, see for instance reference 2). Chemistry-wise, with the strong support of Stewart T. Cole, we thus set to make series of analogues (3-7). Out of this research in organic chemistry, we were led to design original synthetic pathways to an array of analogues. First, from a wide range of 2-hydroxybenzaldehydes (3), the use of Ytterbium triflate allowed the generation of the quinonome methides intermediates 4, which reacted with isobutene (5), to give the benzochromenes 5. This method was also used to prepare the dibenzofuran 1 in one step from compound 7 (3). 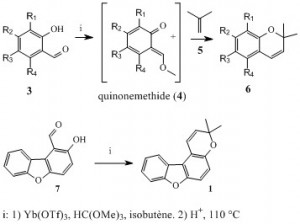 In order to generate even more substrates for this reaction, we then focused on the use of 2-formylhydroquinone (8) which could be oxidized in situ into the 2-formylbenzoquinone (9). Addition of a variety of enol ether (10) (as well as enamines) allowed the construction of the benzofurans 11, from which many furo[3,2-f]chromene analogues 12 were then very simply accessed (6). 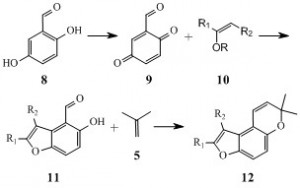 Finally, a large scale synthesis of the stable phosphonium derivative 13 provided a convenient building block from which a reaction with activated acids 14 gave an array of esters 15. Then, an internal Wittig reaction (on a carboxylic ester !) gave an access to even more diverse furo[3,2-f]chromenes (16) (7). 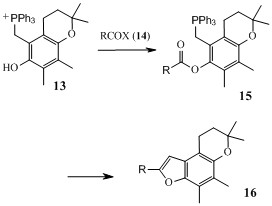 Out of this work many analogues were thus made. Unfortunately, if the chemistry was original, none displayed the required specific activity on mycobacteria and, even worse, some turned out to be cytotoxic. Accordingly, this project was abandoned and to this day we do not know what is providing the modest but specific antimycobacterial activity of compound 1 and 2.