The roles of leptospiral exoproteins in the mechanisms of disease manifestation in the host have not been determined. We assessed the composition and quantity of exoproteins of pathogenic L. interrogans and their contribution to disease pathogenesis. Label-free quantitative mass spectrometry of proteins obtained from Leptospira cultured in vitro under conditions mimicking infection identified 325 exoproteins. The majority of these proteins are conserved in the nonpathogen L. biflexa, and proteins involved in metabolism and energy-generating functions were overrepresented and displayed the highest relative abundance in culture supernatants. Our results indicate that pathogenic Leptospira exoproteins primarily function in heterotrophic processes (the processes by which organisms utilize organic substances as nutrient sources) to maintain the saprophytic lifestyle rather than the virulence of the bacteria. The underrepresentation of proteins homologous to known virulence factors, such as toxins and effectors in the exoproteome, also suggests that disease manifesting from Leptospira infection is likely caused by a combination of the primary and potentially moonlight functioning of exoproteins.

Analyses of Leptospira genomes have shown that the pathogenic leptospires (but not the saprophytes) possess a large number of genes encoding putative extracellular proteins containing leucine-rich repeat (LRR) domains. In other pathogenic bacteria, proteins with LRR domains are involved in mediating host-cell attachment and invasion, but their functions remain unknown in Leptospira. To gain insight i 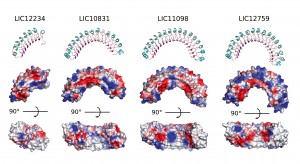 nto the function of leptospiral LRR proteins, crystal structures of four LRR proteins that represent a novel subfamily have been solved. The proteins adopted the characteristic α/β-solenoid horseshoe fold. The exposed residues of the inner concave surfaces of the solenoid, which constitute a putative functional binding site, are not conserved. The various leptospiral LRR proteins could therefore recognize distinct structural motifs of different host proteins and thus serve separate and complementary functions in the physiology of these bacteria.

To further examine the role of LRR-containing proteins during the infection process, we explored the expression, localization, and function of Leptospira LRR-containing proteins. Expression analysis in L. interrogans demonstrated temperature regulated LRR protein expression in vitro and in vivo expression of these proteins in an animal model and patients. The binding capacity of L. interrogans proteins to various host matrix proteins was also tested identifying fibronectin, laminin and E-cadherin as binding targets of LRR proteins. These results provide biochemical evidence of LRR protein mediated host-pathogen interactions and identify for the first time a Leptospira protein that binds human E-cadherin.