We found that the H3K9me3 epigenetic mark acts as a landing pad for the binding of HP1, impacts alternative splicing through slowing down of RNA polymerase II and favors the recruitment of the spliceosome (Saint-André et al., 2011).

We have identified trimethylation of Lysine 9 on histone H3 (H3K9me3) as specifically accumulating on variable exons in the CD44 gene (Saint-André et al., 2011). This epigenetic modification is a binding site for the Heterochromatin Protein 1 (HP1) frequently defined as a transcriptional repressor. HP1γ stabilizes association of the pre-mRNA with the chromatin and facilitates inclusion of alternative exons via a mechanism involving decreased RNA polymerase II elongation rate. 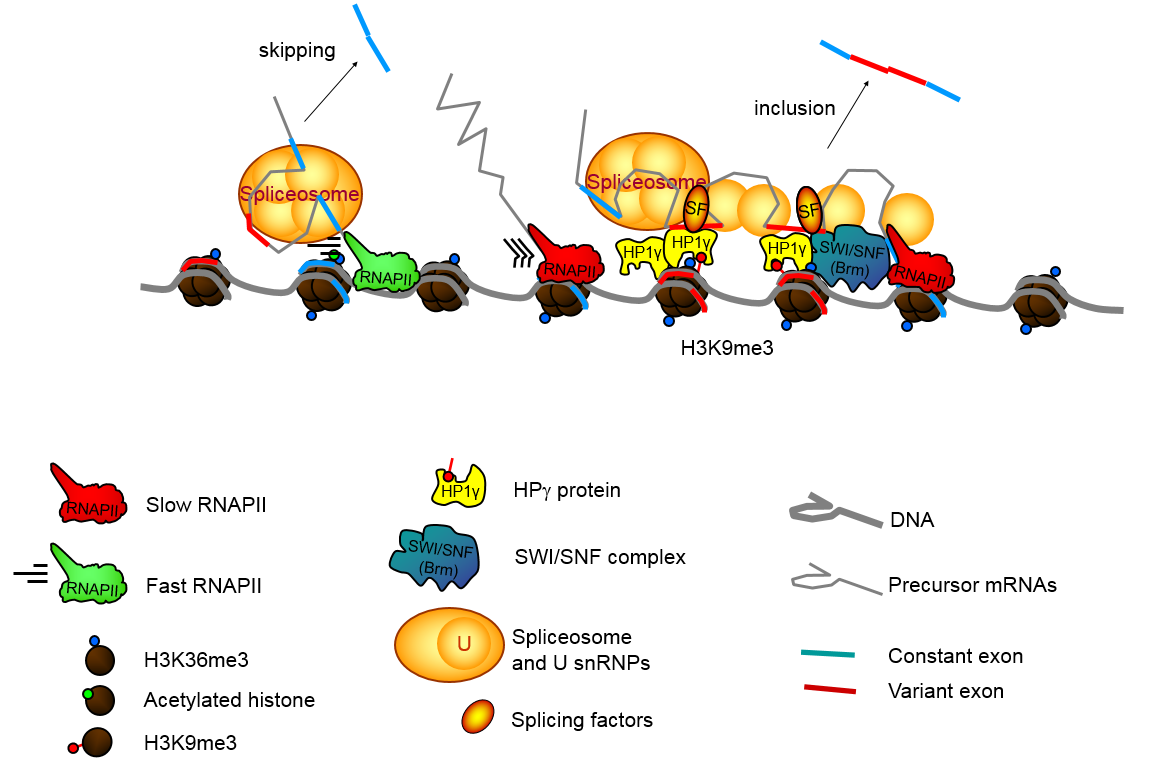 In fact, HP1 proteins can be recruited on the chromatin not only via their H3K9me3 binding domain, but also via their chromo-shadow domain that, when in a dimeric form, associates with the globular domain of H3 at a position made accessible by SWI/SNF remodeling in vitro (Lavigne et al., 2009).  Consistent with this, HP1γ recruitment to CD44 chromatin benefits from the presence of BRM (Saint-André et al., 2011, Batsché et al., 2006). We proposed that HP1 proteins recruited through methylated histone H3 tails may function as sensors of unwanted SWI/SNF remodeling activity. Dimerized HP1γ might bind the nucleosomes and inhibit the chromatin remodeling required for the RNAPII progression

Several independent studies have now shown that alternative splicing regulation can be influenced by histone modifications such as H3K4me3 leading to the recruitment of the ATPase CHD1 (Sim et al. 2007 in Mol Cell), histone acetylation (Schor et al. 2009 in PNAS), and H3K36me3 facilitating the recruitment of splicing factor through the interactions with readers of this epigenetic mark (Luco et al. 2010 in Science).