We have found that alternative sigma factors, TetR and BotR, positively regulates the production of tetanus toxin (TeNT) and botulinum toxin BoNT as well as that of associated non toxic protein forming BoNT complexes in C. tetani and C. botulinum, respectively. BoNT and TeNT synthesis is strictly regulated at the transition phase between the late exponential growth and the beginning of the stationary phase. 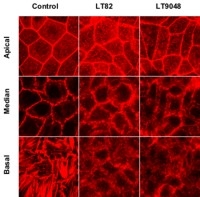 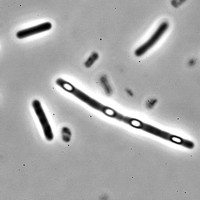 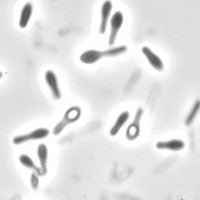 Clostridial binary toxins (C. perfringens iota, toxin C. botulinum C2 toxin) represent attractive tools to vehicle heterogeneous proteins into target cells, since the functional domains are located in two separate proteins. We have found that the binding component (Ib) of iota toxin form channels into lipid bilayer and that Ib when bound to target cell membrane, oligomerizes and is then distributed in detergent-resistant membrane microdomains permitting the translocation of the enzymatic component (Ia) through the endosomal membrane.

Large clostridial toxins such as LT from C. sordellii glucosylates various Rho and Ras GTPases. We have described that LT binds specifically to phosphatidylserine (PS) and that LT glucosylation activity is higher when the substrate Rac is linked to lipid membrane, preferentially enriched in PS. LT preferentially alters basolateral actin and E-cadherin intercellular junctions of polarized epithelial cells, induces apoptosis in myeloid cell line, as well as degeneration and regeneration of skeletal neuromuscular tissue.

Expert work on botulism includes: preparation and production of recombinant antigens of BoNTs, production of specific polyclonal and monoclonal antibodies, genotyping and sequencing of BoNT gene of C. botulinum strains.

The CNR of anaerobic bacteria and botulism is involved in identification of anaerobe strains isolated by hospital laboratories, as well as in diagnostic and survey of botulism in France . Taxonomic studies of certain groups of anaerobes, as well as genotyping and characterization of C. difficile emergent strains are in progress