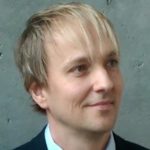 Simon obtained a PhD in paramagnetic resonance spectroscopy from Monash University (Australia) in 2002, which was followed by postdoctoral research in magnetic resonance imaging (2002–2004) and bioinorganic chemistry (2004–2006) at the University of Queensland, Australia. From 2006–2009, he was a research fellow at the University of Melbourne, Australia, characterising metal binding of misfolding proteins and developing in vivo fluorescence imaging methods to study animal models of neurodegenerative disease. In 2010–2011, he undertook advanced characterisation of metalloenzyme active sites at the Max Planck Institute for Bioinorganic Chemistry, Germany. He was subsequently awarded a prestigious Future Fellowship from the Australian Research Council (2012–2016), appointed independent laboratory head (2014) in the Florey Department of Neuroscience and Mental Health, University of Melbourne, then became a Senior Research Fellow (2017–2018) in the Department of Medicine (Royal Melbourne Hospital). Prior to joining Institute Pasteur, he was a group leader at the Institute of Biochemistry and Biophysics, Polish Academy of Sciences (2018–2021). His main research interests are protein misfolding and the biological chemistry of Cu2+ binding peptides and proteins.