Robin Chalumeau started his PhD in september 2018, with the support of the INCEPTION program, under the joint supervision of Jean Christophe Olivo-Marin at the head of the Bioimage Analysis unit and Jost Enninga at the head of the Dynamics of Host-Pathogens interactions. His project aims to developp a next generation of  Structured Illumination Microscopy (SIM), with high spatial and temporal resolutions. Such imaging modalities would improve the understanding of biological mechanisms such as the intrusion of Shigella in epithelial cells.

Structured illumination microscopy is a microscopy method that has received increasing interest since its discovery in the 2000s because it is a dynamic, full-field super-resolution imaging method that does not deteriorate the observed samples. This method involves illuminating the sample with a sequence of complementary patterns. The measured images must then be recombined by an algorithm to obtain an image of twice the resolution. The sequence of illumination patterns was originally made up of 9 sinusoidal grids, on the one hand for its theoretical simplicity since it leads to a well-posed inverse problem and on the other hand because it is technically easy to manufacture. Since then, new, more versatile optical components have been developed and industrialized, making possible the use of a wider variety of illumination patterns and thus opening up new avenues of research. The aim of my thesis is to optimize the performance of SIM imaging as much as possible, by improving the temporal resolution without losing spatial resolution. 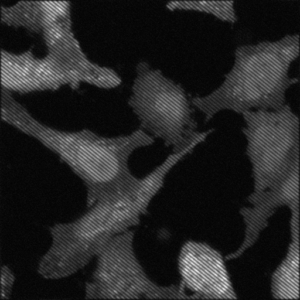 Next generation of Structured Illumination Microscopy (SIM) for biological imaging