Social phenotyping in mouse models of ASD currently present two major limitations. First, social behaviours are usually assessed during short-term interactions in a novel environment and after experimenter manipulation. Such brief social interactions concurrently occurring with the exploration of the environment and following human manipulations are likely to reflect stress and do not represent the typical social interaction between cage mates in a home-cage. A new phenotyping setup to individually follow mice within a group in a larger and richer environment for longer time periods is currently developed. One aim of the current project is to provide a protocol to track individuals within a mixed genotype housing group, without human intervention. Fabrice de Chaumont is currently developing the automated tracking algorithm. This system will push back experimental limitations and increase drastically the quality and quantity of the extracted data.
Second, analyses of social behaviours are currently using human-defined behavioural static categories. These categories might follow neither the ones meaningful for the animals nor the distributions of the various measurements. These categories are thus imprecise and increase the risk of event exchange. Better-segmented behaviours are needed to unravel the potential hidden effects of pharmacological treatments. This method also takes only the known part of the behavioural repertoire of the species into account, and produce thus a potentially partial description of the phenotype. Finally, these arbitrary categories are potentially redundant. This prevents the analysis of the information present in the simultaneous exhibition of two behaviours. Describing abnormalities in mouse social behaviour with a high level of details overcomes human natural capacities in terms of identification and tracking of the individuals as well as in recognition and quantification of these behaviours.
Major breakthrough in the study of mouse models of ASD could be achieved thanks to innovation in the field of computational analysis of behaviour. A second goal of this project is thus to develop the analysis pipeline of the tracking system currently developed: an automatic behavioural classification algorithm, to recognize and quantify behavioural traits, based on the tracking outputs.
Currently, the characterization of the social behaviour of mouse models relies on a small subset of social events selected by previous studies. Examining the behaviour in a more exhaustive way will allow to unravel subtle but robust phenotypes and hidden effects of pharmacological treatments in order to refine these ones. Some rule-based classifiers can allow to describe behaviours depending on the tracking outputs, but the thresholds separating the behaviours are determined by the experimenter, and thus arbitrary and anthropomorphic. The only way to ensure that our investigation is not limited by our a priori knowledge about mouse social behaviour is to analyse it through unsupervised machine learning. Analysing behaviour in respect of data distribution is also a potential factor to increase precision to discriminate between regular occurrences of behavioural traits and occurrences affected by a genetic mutation.
To take into account the complexity of social behaviours, I designed the first unsupervised algorithm able to classify behaviours in a way that allows their association in simultaneous occurrences. This analysis pipeline was established on the tracking outputs of the previous semi-automatic tracking system “mouse profiler” [1]. This work led to the submission of a conference papers [2-3].
The next step is now to adapt the analysis pipeline to the tracking system currently developed and to dig further into the analysis to understand the upper structures of behaviours integrating the instantaneous behavioural states described previously. A seconde layer of analysis has been developed, wich add to the comparison of the proportion of exhibition of behavioural categories, a comparison of the behaviours in there nature and the way they are segmented from each other [4]. 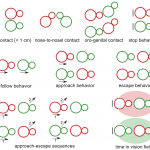 In order to characterize the mechanisms leading to autism spectrum disorders, we are studying several mouse models. These models are mutated in a gene of interest that has been associated with ASD in genetic […]