I am a postdoctoral researcher in Virology and Molecular Immunology with a background in Pharmacy and Pharmaceutical Chemistry. My broad background reflects my natural curiosity and my passion for science.

In humans, YFV primarily targets the liver and replicates in hepatocytes. The pathological changes occurring in the liver during wild-type YFV infection are poorly characterized. The aim of this work is to investigate the signalling pathways and subsequent cytokine response from human hepatocytes infected with several wild-type strains or the vaccine (17D-204) strain of YFV. Ultimately, our goal is to reveal the molecular basis of the difference between specific strains. This could be key to understand the attenuation of virulence observed with the YFV-17D, and possibly other related viruses.

Despite representing a rare cell type in the immune system, plasmacytoid dendritic cells (pDCs) are the most important source of type I IFN in response to viral infection. The canonical model of pDC activation states that pDCs respond to RNA viruses exclusively through TLR7. We showed that replication of the yellow fever live vaccine YF-17D in human pDCs and pDC-like cell lines stimulated type I IFN production through RIG-I (retinoic acid–inducible gene I), a member of the RIG-I–like receptor (RLR) family of cytosolic PRRs. Thus, human pDCs sense replicative viral RNA. In contrast, direct contact between pDCs and YF-17D–infected cells stimulated a TLR7-dependent, viral replication–independent production of type I IFN. We also showed that the RLR pathway was dampened by the activities of interleukin-1 receptor–associated kinases 1 and 4 (IRAK1 and IRAK4), which are downstream effectors of the TLR7 pathway, suggesting that both kinases play opposing roles downstream of specific PRRs. Together, these data suggest that a virus can stimulate either TLR or RLR signaling in the same cell, depending on how its nucleic acid content is delivered. 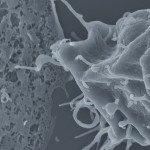 Understanding viral attenuation for the rationalization of vaccine design

Vaccination is one of the greatest successes of modern medicine. The first generation of viral vaccines relied on empiric attenuation by repeated passage in animals and/or cultured cells. A successful attenuation process eliminates virulence […]

Description: I’m working in the “Viral Genomics and Vaccination” Unit to delineate the innate immune mechanisms involved in the host response against Yellow fever virus and other viruses.

August 2015: Group Leader and WHO Consultant

I was employed for a month in a mission to fight the Ebola epidemic as Head of the Pasteur Institut Ebola Diagnosis Laboratory of Macenta, Guinea. I also contributed to the field work related to surveillance and response activities, under the Global Outbreak Alert and Response Network (GOARN) umbrella.

Description: I concluded 4-year Ph.D. Programme in Immunology, which took place in The Institute of Immunology (NUI Maynooth, Ireland). The title of my Ph.D. thesis is: “Investigating the role of IRAK1 in Toll-like receptor (TLR) signalling pathways”. Alongside my Ph.D. research, I’ve been demonstrating Biology laboratory classes to BSc. students,  helping and guiding them during practical sessions.

Description: I carried out a 6-month practical training in an approved establishment under the supervision of a tutor pharmacist, in order to enter the Licence Examination, which was successfully passed within July 2008.

Description: The research for my Master’s thesis was conducted in the framework of a research apprenticeship in Sigma-Tau S.p.A.. The title of my thesis is: “Screening of active molecules modulating the pro-inflammatory pathway mediated by TLR/IL-1R activation”.